Ever heard of keto? Probably. It’s kind of taking over for a lot of people in the health and fitness world.

I tried the keto diet for 30 days to see how my body reacted to it. If you are unfamiliar with the term “keto,” I’ll give you the run down.

Essentially, you cut out sugars and carbs from your diet so when your body needs energy it takes fat instead of carbs to burn. Meaning, burning the fat from your body.

You’re probably wondering, um how do you eat without any sort of carbs in your diet? Well, you can use a calculator to see how many carbs a day you should intake within your macros. For me, I was at 21g of carbs per day. Which is NOT a lot.

Instead of adding the rice or potatoes or any other starchy side to your daily meals, I replaced it with more fatty foods. Whether that be an avocado, extra veggies, nuts, cheese, anything like that.

What I found throughout my day-to-day eating was that I was way less hungry. When you’re following a guide and eating things you are typically told to avoid, it kind of fills the void of not having carbs. Which, sounds insane, I know, but it’s the truth.

The first week I got hella keto flu, which is your body adjusting to not burning the carbs as energy and using the fat instead. And flu means FLU. I was shakey, weak, cold-sweating — it was not good. I remedied this with a few mugs of bone broth and that helped me get through it.

When this happens and flu-like symptoms take over, give your body electrolytes! Eat a little salt, have some bone broth, drink some smart water. It works, I swear.

To track my progress through this, I took pictures at the start of each week. I’m not a fan of scales because the number can be totally deceiving, which sucks, but I used it to see what was happening to my body.

After the first week, I lost over six pounds. I felt kinda nervous about this, yes it was nice, but it gave me a scare that what I was doing wasn’t healthy or would help me in the long run.

So I did a little research and saw that the first week was mainly water weight I lost. Thank god. I wasn’t deteriorating before my eyes. The next few weeks were more steady and REALISTIC. One week I even increased in weight. Which is totally normal.

I tracked my macros with an app called KETO. With this app all I had to do was put my food into the app and see where I was with macros throughout the day. I’ve never been one to do all the work for “macros” but this was super easy. Definitely recommend this app to track.

Overall I lost a total of 9.8 lbs. Hooray! My body felt great. I had tons of energy (after the first week) and don’t get me started on how much more confident I felt about myself.

Even if you aren’t seeing immediate or even drastic results, knowing that you’re doing something to make you feel better about yourself does amazing things to the self-esteem.

The next step was figuring out how to transition back to a semi-normal diet, but trying to keep my low carb tendencies in the mix.

I didn’t want to be all keto all the time because it can get a little expensive, and let’s face it, I’m 22 and drunk-eat pizza and McDonald’s from time to time. However, my day-to-day diet has been a lot more stable and includes little to no carbs.

Going keto for a month definitely taught me how to really understand the contents of what I’m putting in my body. You really learn how much carbs you are taking in when you keep track of it for a long period of time and become more conscious of it when it isn’t forced.

So, will I do keto again? Hell yes. Will I be a consistent keto-goddess for months at a time? No. It’s not because I didn’t like it or feel like it won’t get me results, but because I just don’t like to commit to a hardcore diet like that long-term.

I 10/10 recommend trying the keto diet for those looking to transform your diet, body and the way you think about food. But of course, make sure you do a lot of research before you do this to make sure it will be a good fit for your body.

This was great for me because of my polycystic ovarian syndrome, but we will save that discussion for another blog post 😉

Thanks for stopping by ☆ 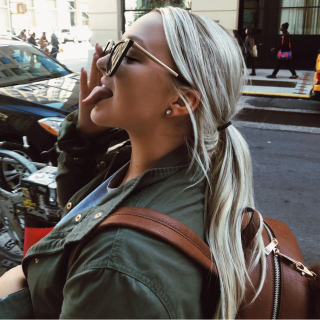 Hi, I'm Liv - blogger, dog mom, and Dr. Pepper lover. My site is all about trying new things & sharing personal tips from my experiences. Follow along with me as I share my passions with you! Hopefully, you find some of what I have to say useful to you ☆